Power-wise Pai Yu Po (pictured above) took a ‘more is more’ policy. Time and again and from start to finish the Chinese Taipei player’s shots were punchy from smashes to clears to cross-court defense, forcing Yeo to mishit regularly.

But in terms of footwork, Pai went with a ‘less is more’ approach. She was addressing low shuttles just in time but, overall, staying in control of the match. She was deliberate about not wasting energy through court movement. There was little change of pace or acceleration.

Yeo was guilty of not moving her opponent around enough, and when she did Pai was susceptible to dropshots.

Eventually the Singaporean was visibly out of ideas. Pai sealed the concluding phase of the match, 21-12, by hitting back into the spaces recently vacated by her opponent who had been at full stretch and recovering back to her base position .

At the same time, the 2012 men’s singles champion Sho Sasaki was in the general seating area watching no players in particular while Malaysia’s Ng Tze Yong completely missed a slow sitting duck in the lights on Court 3. 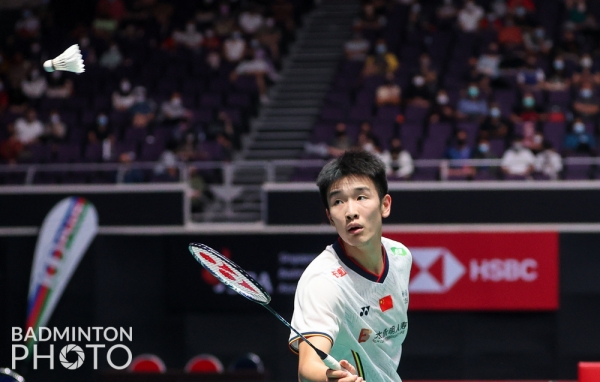 Pure Chinese-flavoured determination helped Han Yue and Li Shi Feng snuffed out genius starts by Korea’s Kim Ga Eun and Chico Aura Dwi Wardoyo respectively. As an ability it doesn’t pay as many dividends as during the nineties and noughties but it sure isn’t something everyone has up their sleeve.

Korea’s Kim can produce a wonderful lightness of stroke-making and footwork when playing freely, which is difficult for opponents to keep pace with. But the moment the scoreline gets tense and close the Korean typically hasn’t found a way to reliably reproduce the effect.

Then on, Han Yue made quick work of her devastated Korean opponent, who’d narrowly missed out tying up proceedings in straight games. 9-21, 22-20, 21-6.